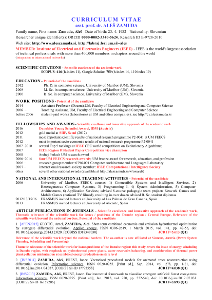 I am pursuing my passion for programming since the first grade of elementary school and have visited private international summer schools to study it. Later, I received B.Sc., M.Sc, and Ph.D. degrees in computer science from University of Maribor (UM) in 2006, 2008, and 2012, respectively. I was awarded habilitation as an associate professor in 2020 (assistant professor in 2014), and am affiliated with the Faculty of Electrical Engineering and Computer Science at UM, a member of the international IEEE organization, and a reviewer/editor for several prominent scientific journals on computer science. I visited several international universities as a lecturer and won several competitions on programming, national and international; developed open source software, and also sold several services in my profession. You are invited to see my full Curriculum Vitae.

More external sources saying about me: see the In Media tab.